On This Day…27 September

So, this week we begin with events on this day in…

﻿1540 – The Society of Jesus (the Jesuits) receives its charter from Pope Paul III.

1590 – Keeping with things papal, Pope Urban VII dies 13 days after being chosen as the Pope, making his reign the shortest papacy in history. He plainly didn’t fancy the job.

1777 – Lancaster, Pennsylvania is the capital of the United States, for one day. It plainly didn’t fancy the job, either.

1821 – Mexico gains its independence from Spain.

1854 – The steamship SS Arctic sinks with 300 people on board. This marks the first great disaster in the Atlantic Ocean.

1905 – The physics journal Annalen der Physik published Albert Einstein’s paper “Does the Inertia of a Body Depend Upon Its Energy Content?”, introducing the equation E=mc². Decades later, the rock group Big Audio Dynamite attempted to explain it by song. The tune was good; the explanation rubbish. (It’s actually a homage to the films of director Nicolas Roeg.)

1928 – The Republic of China is recognised by the United States.

1995 – The Government of the United States unveils the first of its redesigned bank notes with the $100 bill featuring a larger portrait of Benjamin Franklin slightly off-centre.

Bill O’Herlihy, RTE sports presenter, is 72. The boys of Apres Match do a great impression of him.

Irvine Welsh, author of Trainspotting, is 52.

An Aardvark in South Africa: The Attack of the Vuvuzelas – Part Two

So many matches, so little time.

The “necessary documentation” I got from Acquisitions allowed me to teleport directly to Johannesburg for the opening ceremony. Us Higher Beings are not allowed to play willy-nilly with the laws of time and physics; Universal Travel Displacement Visas are required by all who wish to journey between dimensions. If this all sounds too Sapphire and Steel for you people, let me just say one thing: we took over from those clowns after the Thames Waterloo debacle. What was that? I hear you ask. Just one of those momentary lapses of reason that had to be sorted out. Trust me, you never ever want to see Napoleon Bonaparte dressed as a drag queen in Westminster Abbey. Your eyes would water. Anyway, where was I? Oh yes, I was in South Africa.

The opening ceremony and the first game: the hosts, the mighty Bafana Bafana against Mexico, the country that decided it was a good idea to put a worm at the bottom of a bottle of Tequila. As opening ceremonies go, the South Africans matched that of the Olympiad of Ancient Greece. (I was around at the first one. I offered to give the poor marathon runners a ride on my Honda 50, but I was told that was against the spirit of the games. I was chased out of Athens by men in skirts, wielding spears and such.) There was colour, there was music, there was the sense of international camaraderie, of how sport would transcend politics, and there were vuvuzelas. 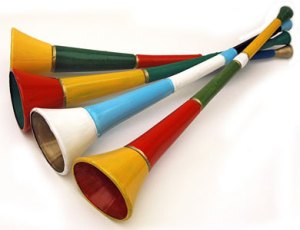 There were lots and lots of vuvuzelas. During the ceremony I sent Jimbo a text. It’s mad here. All these horns going off. I can hardly hear myself think.

Nothing that I can’t undo when I come back, I texted back.

Bring me back a stick of rock, he replied.

Everyone in the stadium was full of the joy of life; but there was sadness there, too. The country’s patriarch, Nelson Mandela, was due to attend the ceremony but his great-granddaughter was tragically killed in a car accident days previously. South Africa mourned with him, as did I. It was hoped he would be around for the closing ceremony. But onto the match itself. The host nation wanted desperately to put on a good show for their many supporters and when Siphiwe Tshabalala buried the ball in the 55th minute, I could feel a continent uproot itself with cheering. The vuvuzelas made their presence felt. Unfortunately, a win was beyond the South Africans because Rafael Marquez equalised with ten minutes to go. A shame, really, but football is like that. It’s a funny old game; a game of two halves; a game were 22 men chase after a ball and if they don’t get it, they cry like babies. Sorry, that’s the French who do that.

I called HOH after the game, making sure he still wanted me to put that bet on. “Oh indeed,” he replied. “The word in the England camp is that Stevie Gerrard is chomping at the bit and Lampard is raring to have a go at the Yanks.”

The next match on the list was France against Uruguay. I decided to give that one a miss. My toenails needed a make-over. Besides, my own contacts said that the French didn’t give a merde.

Back in Ireland, the lads of Apres Match got together and petitioned FIFA to include the Republic’s soccer team in this year’s tournament. This is what they came up with.