The Official Logo for Euro 2012

The last time the Republic of Ireland’s soccer team kicked a ball in anger during a competitive fixture (as opposed to a ‘friendly’, that is), it was that tragic night in Paris last November, when Thierry Henry’s illegal handball gifted France a 1-1 draw, thus denying Ireland a place in this year’s FIFA World Cup.

But now it’s time to do it all over again. Euro 2012 is hosted by Ukraine and Poland. 51 teams have been drawn into nine groups: six groups of six countries, three groups of five. The team that finishes top of their group qualifies for the finals automatically. The highest placed runner-up also qualifies. The rest of the second-placed teams (eight altogether) go into a home and away play-off draw, with the resulting winners qualifying for the tournament. Poland and Ukraine qualify as host countries.

In total, 16 countries will play in the finals themselves.

The Republic of Ireland team have been drawn in Group B; alongside Russia, Slovakia, Andorra, Armenia and FYR Macedonia.

These are the fixtures: (A = away game, H = home game at Lansdowne Road) 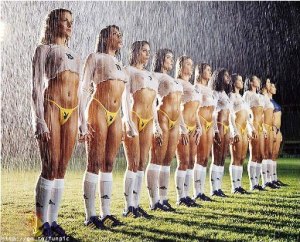 The blond in the middle is the captain, Robbie Keane.