The Dark Tower: My Journey Ends.

Where do I begin (or so the song goes, anyway)? It’s been a two month journey, but I finally completed all seven books of Stephen King’s The Dark Tower last weekend. So I’ve had a few days to let them sink into my consciousness, to absorb their intensity and work out what I really thought of them.

Let’s start at the beginning, shall we? And be warned, there are spoilers ahead; minor ones, but spoilers nonetheless.

The Gunslinger introduces Roland Deschain, son of Steven, of the Line of Eld. 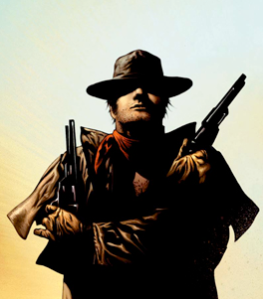 He’s an enigmatic character, a man of violence, born from tragic events from his past. He is the last of his kind, alone in a world that has “moved on,” may it do ya. It was my third time reading this book, but for once it took me into Roland’s world. This time around, I felt I could move on with the gunslinger and join his quest for the Dark Tower and follow along with him as he chased the man in black across the desert.

The Drawing of the Three is where it went wrong for me last time around. I wanted to stay in Roland’s world.

But I forced myself to get into the mind of Eddie Dean, heroin addict. And it was through Eddie that I learned more about Roland and what he had to do in order to achieve his destiny. Eddie’s rescue from gangsters and his “cold turkey” experience endeared him to me. His interactions with Roland provide a fair amount of humour.

It was in helping Roland to secure the last of the “three” that Eddie met the woman who would change his life forever: Odetta Holmes Walker, she who was to become Susannah Dean. Odetta/Detta/Susannah lost her legs when a maniac serial killer, Jack Mort, pushed her onto the subway tracks, just ahead of an oncoming train. When Roland and Eddie drew her into Roland’s world, she and Eddie fell in love. But still, Roland’s ka-tet was not complete.

The Waste Lands brings back Jake Chambers, the boy Roland let die in book one. “There are other worlds than this,” Jake said as he fell to his death.

And there most certainly were other worlds. At the beginning of book three, both Roland and Jake are slowly going insane. Jake because he’s positive he should be dead; Roland because without Jake, his ka-tet is incomplete. In a wonderfully tense section, involving Jake, a haunted house, a rose that appears to be related to the Dark Tower itself, and a sex-mad demon, Jake arrives into Roland’s world. For his troubles he finds a pet: a billy-bumbler he calls Oy. By far the most disturbing sequence in the book is the introduction of Blaine the Mono. A psychopathic monorail with a penchant for riddles, the novel ends on the series’ first real cliffhanger.

Wizard and Glass resolves that cliffhanger and shows once again why Roland cannot complete his quest alone. Each of his ka-tet brings their own uniqueness and talents to the table.

The book then takes us back to when Roland was a teenager. He and his friends are sent on a mission, part punishment for their impudence, but also because the Good Man John Farson has brought insurrection to Mid-World. It is on this mission that Roland meets the love of his life, Susan Delgado.

Roland and Susan carry out a clandestine love affair, but Roland is ever mindful that it will not – and cannot – end well. There is far too much at stake for something as trivial as love to come between him and his mission. The town of Mejoris, where Susan lives, hides a deadly secret: there are forces of evil at work here, and not just human ones. There is a glass ball that contains Roland’s ultimate destiny. It is the fight for the ball, and the routing of Farson’s men and machines, that brings Susan and Roland’s love to an end.

Roland shares this story with his ka-tet as a way of catharsis. Once it’s told, he can now move on with his quest. But it proves that wherever Roland travels, death is never too far behind.

Wolves of The Calla is King’s homage of sorts to The Seven Samurai and The Magnificent Seven. Calla Brynn Sturgis is under threat from the Wolves, creatures that appear once every 25 years to abduct children, specifically a twin. The townsfolk approach Roland and his band to help them. Not everybody is on the side of good, though. Inevitably there are some who wish that Roland would simply go away. In the end, there is a resolution of sorts – but at a cost to Susannah.

What makes this book stand out from the previous in the series is that King begins to link Roland’s quest with some of his own work. Wolves reintroduces Father Donald Callahan from Salem’s Lot and it here that we begin to see what the author is up to. The Dark Tower is a meta-narrative: a story about a story, a story within a story. King has gone all postmodern on his reader.

Song of Susannah is the penultimate novel in King’s series. It’s also the one that, or so I’m told, is the weakest of the seven. I suppose one of the books has to be. But I liked it for its brevity. It’s basically one set-piece after another. Susannah is in New York and is in thrall to a demon called Mia. Mia is the “mother” of the child Susannah now bears. (Remember the sex-mad demon from The Waste Land?) Roland is the “father.”

The most remarkable section in this book is where Stephen King brings himself into the story. To his credit, he doesn’t come out too well. He’s well aware of what type of person he was back in the day: a soon-to-be chronic alcoholic, a lazy writer who didn’t want to finish his magnum opus. Roland and Eddie, realising that King is the focus point of their quest, turn up on his doorstep and convince him to complete their story. (Which, as we all know, he did…eventually.) 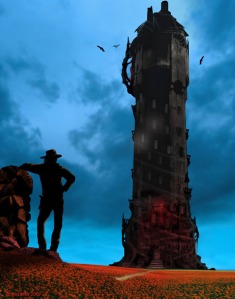 The Dark Tower is the last volume of the series, a massive 800 page conclusion to all that has gone before.

And it’s a belter. I’ve not read a book that size in such a short space of time. Though I tried to stretch it out as long as I could, I needed to know what happened at the end. I lost sleep reading it – and I don’t regret a single moment.

But did it end well? Did Roland reach his fabled Tower? Yes, of course he did. Did he make the final journey on his own, just as he thought he always would? I’m not giving too much away by saying that yes, he did.

But what of his ka-tet? I’m pleased to say that each character is gifted with an end that’s fitting. I’m not necessarily saying that they all lived happily ever after, or even if they lived at all. There is bloodshed and there are tears. There has to be. But what of the end? Those of you who have read the series know what I mean by the end.

Well, I have to say that I was waiting for it. It kind of ends where the story begins. It’s not a “reset button,” I don’t think. But it makes sense in a way that Lost couldn’t and didn’t. Would I revisit Roland’s world again? I would…but not for a while. I want to savour it for now. I want to remember it for what it is: a bloody good story, an epic tale, packed with characters that fill your head; a book that I can now say, with head high, that I’ve read and enjoyed.